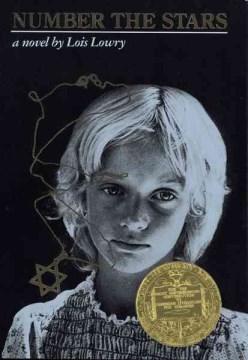 Number the Stars was a wonderful book! I really enjoyed the book since I was able to learn a lot about World War 2 and the events that may have happened during that time. The story follows a family living in Denmark during World War 2 who help Jews escape before the German Nazis can relocate them. It is based around real events that have happened during the war such as synagogue raids that happened to get lists of Jews to relocate. I enjoyed how informational the story was, as well as the amount of suspense that came with. Often times throughout the book I was at the edge of my seat seeing what would happen next. It is also a book that isn't too heavy on the topic of World War 2 since there was so much brutality during that time. I recommend this book to anyone that enjoys historical fiction, or simply wants to learn about World War 2!

Completely beautiful. The ideas and notions the Lois Lowry comes up with are astonishingly truthful and hit straight to the heart. A great introduction to the horrors of the world and humankind for younger readers, along with religion and fear. This book is told so realistically that you feel inside of the story, with the emotion and slight action, and connect to the fictional characters. A great book.

This was really fun to read. It's a short read, I finished in two days. I suggest this book if you want to learn more about World War 2. It taught me a lot about that time period.

This is a very poignant book that allows the reader to see what it would have been like in World War II, being of the Jewish faith, and how harrowing the risks of helping other people of the Jewish faith try to escape the atrocities occurring at the time. Loved the book, and it is an excellent introduction for kids to see through a child's eyes how the world had once looked.

a great book!!! you will easily fall in love with the characters

This is an amazing and beautiful book! You really appreciate the bravery and compassion that the Danish people had for their Jewish neighbours.

blue_raccoon_279 thinks this title is suitable for 8 years and over

pink_dolphin_3025 thinks this title is suitable for 7 years and over

crhinehart thinks this title is suitable for 9 years and over

violet_panda_53 thinks this title is suitable for 8 years and over

Riley22275 thinks this title is suitable for 10 years and over

BudgiesNbooks thinks this title is suitable for 10 years and over

"I won't!" Kirsti sputtered. "I won't ever, ever wear them! Not if you chain me in prison and beat me with sticks!"

She opened her hand and showed him the necklace. "Can you fix this? I have kept it all this long time. It was Ellen's."
Her father took it from her and examined the broken clasp. "Yes," he said. "I can fix it. When the Rosens come home, you can give it back to Ellen."
"Until then," Annmarie told him, "I will wear it myself."

"How brave are you, little Annmarie?"

“Mama was crying, and the rain made it seem as if the whole world was crying.”

'it is he who heals the broken in spirit and binds up their wounds, he who numbers the stars one by one.'

This book was during a war and about two bestfriends who have to go through some scary times to protect them selves. Even being seprated.They have seen some family die because they were helping jews people.It all doesn't make since

The author, Lois Lowry wrote a lot of books that I enjoyed. Expecially the book 'the Giver' was a book that I liked a lot.
This story is based on Denmark being in the grip of Germany. Denmark surrendered to Germany because they knew they had a small, weak country back then. Annemarie is the main character and she is 10 years old. She has a friend named Ellen who is Jewish. Annemarie has an uncle, who is a fishermen, and she lives with her mom, her dad, and her younger sister. She had a older sister called Lise, but she died because she was one of the resistance to Germany controlling Denmark.
One day, the Germans, who didn't like the Jews, were looking for Jews and arrested them. Ellen and her family were Jews, so they had to escape. Few Jewish people gathered up at Annemarie's uncle's house. Uncle Henrick's house was more safe because it was far from the place where Germans were gathered up. They plan to go to the country Sweden, which was just across the ocean between Denmark and Sweden. Sweden wasn't in the control of Germany because it was much bigger, stronger, and Germany didn't want to take over Sweden for some reason. Uncle Henrick hid them in his house, waited until dark night, and took the hidden Jews to his boat and sailed them to Sweden safely. Ellen and Annemarie promised to meet again.
2 years later, when Annemarie became 12 years old, Germans went back to their own country and Denmark became free.
In the last part of this book, Uncle Henrich and Annemarie talks about bravery. I learned that bravery means not thinking about the dangers but only thinking about what you must do.

number the stars is a book about annemarie and how she helps her jewish friend get to safetyu after the nazi have invaded denmark.

Ten-year-old Annemarie and Ellen are best friends in Copenhagen. Their lives change, however, during the Nazi occupation of Denmark. Jewish families are being ''relocated'', and her family takes Ellen to live with them while her parents go into hiding elsewhere. Ellen pretends to be Annemarie's dead older sister to avoid being killed. Annemarie's family, along with others in the Resistance, risk their lives to try to send as many Jews to safety as possible, and Annemarie learns what bravery really is.

"The gripping story of a ten-year-opld Danish girl who's family's courageous efforts to smuggle Jews out of their Nazi-occupied homeland to safety in Sweden. readers are taken to the very heart of Annemarie's experience, and through her eyes, understand the true meaning of bravery." (Novelist Review)

There are no notices for this title yet.

Loading...
PACL owns a similar edition of this title.