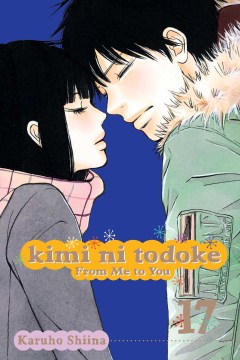 SUCH A CUTE STORY!!

Kimi ni Todoke Volume #17 Contains Chapters 68 - 71: This volume was really good & I enjoyed watching how all the relationships developed between the various characters, especially during the last chapter. I hope things continue to improve for everyone & I am looking forward to the next volume & seeing what happens next.

Sadako thinks her boyfriend is being distant,thus not knowing what is wrong, during the Christmas festival after many of her friends find there future happy endings and future love stories,Sadako confronts her boyfriend after...wanting to give him,before the long holidays his present,she starts crying questioning there relationship,thus her boyfriend only trying to keep his distance because he loves her so much that if he doesn't keep his distance,he would try to take it to the next level,but he respects her and thus he was trying to keep his distance.So with Sadako not knowing what he was thinking breaks down and so her boyfriend tells her how he feels,grabs her and Kisses her with no restraint and now Sadako gets it and now there stronger than ever.(This is a Graphic Novel great Read)

Sexual Content: [Volume 17} Kento confronts Ayane's ex-boyfriend Mogi, who says that he "expected more from her". Angrily, Kento asks how far he went with Ayane, and Mogi hastily says they only kissed.

There are no quotes for this title yet.

Find it at PACL