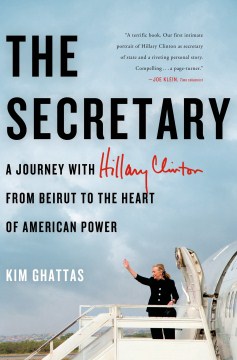 Baker & Taylor
Drawing on extensive interviews with Clinton, administration officials and other players around Washington, a foreign correspondent with both an insider and a global perspective tells the story of Hillary Clinton as America's envoy to the world. 40,000 first printing.

The first inside account to be published about Hillary Clinton's time as secretary of state, anchored by Ghattas's own perspective and her quest to understand America's place in the world

In November 2008, Hillary Clinton agreed to work for her former rival. As President Barack Obama's secretary of state, she set out to repair America's image around the world—and her own. For the following four years, BBC foreign correspondent Kim Ghattas had unparalleled access to Clinton and her entourage, and she weaves a fast-paced, gripping account of life on the road with Clinton in The Secretary.

With the perspective of one who is both an insider and an outsider, Ghattas draws on extensive interviews with Clinton, administration officials, and players in Washington as well as overseas, to paint an intimate and candid portrait of one of the most powerful global politicians. Filled with fresh insights, The Secretary provides a captivating analysis of Clinton's brand of diplomacy and the Obama administration's efforts to redefine American power in the twenty-first century.

Populated with a cast of real-life characters, The Secretary tells the story of Clinton's transformation from popular but polarizing politician to America's envoy to the world in compelling detail and with all the tension of high stakes diplomacy. From her evolving relationship with President Obama to the drama of WikiLeaks and the turmoil of the Arab Spring, we see Clinton cheerfully boarding her plane at 3 a.m. after no sleep, reading the riot act to the Chinese, and going through her diplomatic checklist before signing on to war in Libya—all the while trying to restore American leadership in a rapidly changing world.

Viewed through Ghattas's vantage point as a half-Dutch, half-Lebanese citizen who grew up in the crossfire of the Lebanese civil war, The Secretary is also the author's own journey as she seeks to answer the questions that haunted her childhood. How powerful is America really? And, if it is in decline, who or what will replace it and what will it mean for America and the world?

Baker
& Taylor
Drawing on interviews with Clinton, administration officials, and other Washington insiders, a foreign correspondent presents the story of Hillary Clinton as America's envoy to the world.

The incredibly tightly controlled US CoporateMedia*** doesn't convey to people that HRC is presently under multiple FBI investigations; that one of her earlier appointees, Robin Raphel, is under investigation for espionage; that her appointment - - while SecState - - of Marc Grossman, fits into this pattern, as he was not only an inner Bush circle guy, but was mentioned by Sibil Edmonds as being involved in the sale of nuclear secrets!
Far better, and more enlightening, to read those WikiLeaked US State Department cables to understand the real machinations.
***The top 100 newspapers and the top five media companies all have the same four major shareholders: Vanguard Group, BlackRock, State Street and Fidelity.

This is an interesting book written by a BBC journalist who covers the State Department. The author is Lebanese and presents a unique personal perspective on Middle East issues. Although press are not allowed in the meetings that the Secretary of State conducts around the world, Kim Ghattas was part of the press corps that accompanied Clinton wherever she travelled. The book gives a good general analysis of the almost overwhelming number and variety of world problems confronting Obama and his Secretary of State. Clinton already had good relationships with many foreign leaders and the author believes the Secretary's friendly professionalism endeared her to many leaders. Clinton had a unique priority for a Secretary of State, insisting on meeting with average civilians at almost every stop. She emphasized human rights, and the needs and concerns of women and children while also focusing on America's interests and security. Clinton was an intelligent and voracious consumer of briefing books and other information and prepared extensively before every meeting, even when she had ten in one day.

According to the book, Clinton felt that the real achievement of her years as Secretary of State and of the Obama administration was that working with the United States had once again become desirable. There would still be world leaders who disagreed and criticism was always present no matter what was done. Hillary had already developed a tough skin from her years in the White House and she was unfazed by world leaders or foreign citizens criticizing the US or even herself. She endeavored to look at things from their point of view and thus often understood their frustration and anger. She always did what she could to help. From what was in this book, I believe she is well-prepared to serve as President, should she decide to run.

There are no ages for this title yet.

There are no summaries for this title yet.

There are no notices for this title yet.

There are no quotes for this title yet.

Find it at PACL